THE BRIDGE IS FREE

A Barrier to the Progress of Slatington is Removed.

What the News has long predicted was realized on last Sunday, when the Slatington Bridge was opened to the public as a free bridge and henceforth no tolls will be exacted from persons crossing the bridge on foot or with vehicles of any description.

We rejoice with the people of Slatington and Walnutport, over the realization of a long cherished hope.

For a number of years the question of freeing the bridge was agitated and several times a start was made, but nothing material was accomplished until last June when a petition was presented to the Lehigh County Court by Frank Jacobs, Esq., on behalf of David Williams, Samuel Caskie, William M. Benninger and about four hundred additional petitioners. At the same time Ex-District Attorney Stewart of Easton who acted with Mr. Jacobs in these proceedings, presented a like petition to the Northampton County Court, and after the appointment of six viewers by the Lehigh and Northampton Courts, the proceedings were pushed with a vigor and determination to the end that we now realize a free bridge.

The amount of damages paid equally, by the two counties for the bridge was $14,250. Peter Gross, treasurer of the Bridge Company, has received that amount from the counties.

The freeing of this bridge is an accomplishment, the effect of which many will be slow to realize. It will undoubtedly benefit Slatington and it was a barrier that should have been removed long ago. A free bridge is an evidence that our citizens are progressive and that they possess modern ideas. Now Let SLATINGTON Boom.

Thanks to those progressive men in whose minds the idea of freeing the bridge originated and thanks to the Bridge Company for not placing any unnecessary obstacles in the way of the proceedings. 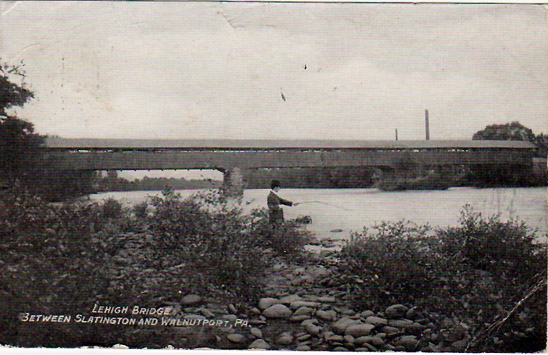 If the image does not display, use this link.

Read the description of the test of Slatington's steam pressured, fire-engine. The town council had just purchased the engine in early October.